The SPAC Boom: A Look at Health IT SPACs and their Sponsors

Financial markets have recently experienced the rise of Special Purpose Acquisition Companies (SPACs). While these publicly traded investment vehicles have been around since the 1990s, a combination of key drivers have recently led to their increased popularity, launching them to the forefront of financial discussions.

From the perspective of private companies, the promise of speed and increased certainty has become highly enticing as the markets experience high volatility due to the COVID-19 pandemic. In a period of heightened market uncertainty, traditional IPOs can become more expensive and it is preferable to lock in a price quickly, something that can be accomplished via a SPAC. This ability is primarily driven by looser regulatory requirements for the shell company’s registration process – saving companies approximately two to four months in hitting the market. From the perspective of the investor, recent high-profile SPAC successes have increased the allure of SPACs. Further, the SPAC model targets companies in earlier maturity stages that would traditionally struggle to IPO, creating an opportunity for retail investors to invest in these otherwise inaccessible businesses. Notably, JPMorgan's analysis has found that the SPAC sponsors and deal-makers make a 958% average return on investment.  According to JPMorgan, "for everyone else: good absolute returns so far but in bull equity markets, rising tides lift all boats. The poor median buy-and-hold relative returns for seasoned SPAC deals (>180-days) are not a great omen."

The combination of these factors has led to more and more companies choosing to sidestep the traditional IPO route, with a record-breaking 83 US-based companies opting to pursue the SPAC model in 2020 and completing reverse mergers. An astonishing 233 SPACs completed IPOs in 2020, more than the total seen from 2008-2019 and there are currently 401 SPACs seeking an acquisition target. These trends have similarly manifested themselves in the Health IT industry, with a total of 11 Health IT SPAC mergers announced from 2020-2021 YTD. 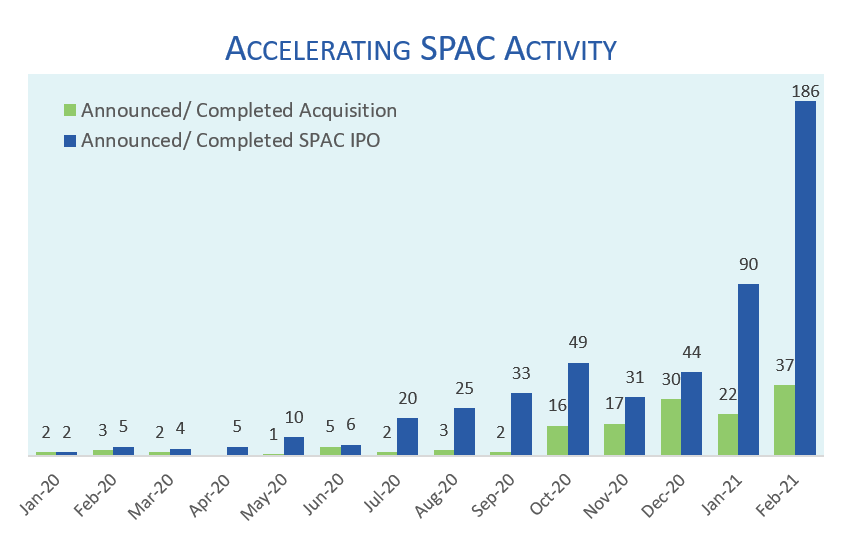 The graphic below illustrates the recent uptick in Health IT SPACs. Notably, the graphic highlights that while the volume of SPACs is increasing, their cumulative value is still relatively small compared to the overall IPO market, reflecting the preference of larger companies to continue to opt for the traditional IPO route. With the exception of MultiPlan, it appears that SPAC targets are more often smaller, high-growth companies that view the SPAC model as an opportunity to capitalize on recent public market dynamics since a traditional IPO would most likely be unattainable. While the unrelenting headlines discussing SPACs would make it appear that there has been a huge shift towards SPACs, the majority of value of newly public companies continues to be generated through the traditional IPO model. 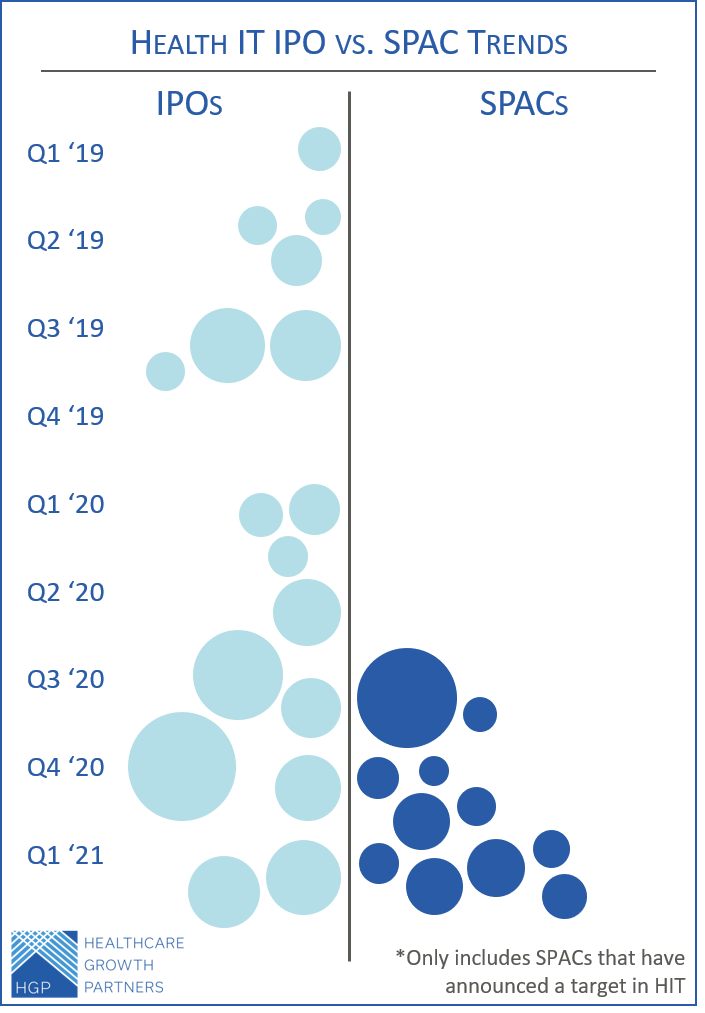 Due to the nature of blank-check companies, SPAC investments are inherently speculative, and investors are ultimately placing bets on the notoriety of the leadership team behind the SPAC, rather than the financial performance of the unknown future merger. Intrigued by the executives behind the SPACs that have selected HIT targets, HGP researched the background and expertise of the teams driving these reverse mergers. Other than a select few, SPAC leadership is distinctly different from many private equity investors that focus on Health IT, who function with deep industry and operating experience to build upon a Health IT investment thesis.  The takeaway is that leadership from most Health IT SPACs to date have expertise in deal-making, but little domain knowledge of Health IT, which is great for closing a platform investment but potentially raises questions about the long-term value potential of many of these entities. Noting this shortcoming and the overall SPAC opportunity, we expect to see private equity sponsors continue to increase their share of SPAC transactions.

Thanks to Nuvie Eshareturi from the UT Health School of Biomedical Informatics for his contribution to this research.