While a pandemic ravages the country, technology valuations are soaring.  The Nasdaq hit an all-time high during the month of July, sailing through the 10,000 mark to post YTD gains of nearly 20%, representing a 56% increase off the low water mark on March 23.  More notably, the Nasdaq has outperformed the S&P 500 (including the lift the S&P has received from FANMAG stocks – Facebook, Amazon, Netflix, Microsoft, Apple, Google) by nearly 20% YTD. 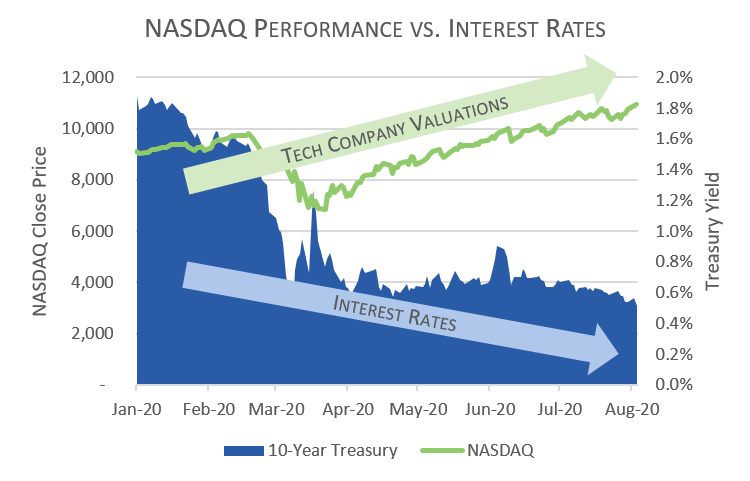 At HGP, we focus on private company transactions, but there is a close connection between public company and private company valuations.  While the intuitive reaction is to feel that companies should be discounted due to COVID’s business disruption and associated economic hardships facing the country, the data and the markets tell a different story.

While technology is undoubtedly hot right now given the thesis that adoption and value will increase during these virtual times, the other more important factor lifting public markets is interest rates.  According to July 19 research from Goldman Sachs,

“Importantly, it is the very low level of interest rates that justifies current valuations. The S&P 500 is within 4% of the all-time high it reached on February 19th, yet since that time the level of S&P 500 earnings expected in 2021 has been pushed forward to 2022. The decline in interest rates bridges that gap.”

Additionally, Goldman Sachs analysts also estimate that equities will deliver an annual return of 6% over the next 10-years, lower than the long-term return of 8%.  Future value has been priced into present value, and returns are diminished because the relative return over interest rates is what ultimately matters, not the absolute return.  In short, equity valuations are high because interest rates are low.

What happens in public equities usually finds its way into private equity.  To note, multiple large private health IT companies including WellSky, QGenda, and Edifecs, have achieved 20x+ EBITDA transactions based on this same phenomenon.  From the perspective of HGP, this should also translate to higher valuations for private companies at the lower end of the market.  As investors across all asset classes experience reduced returns requirements due to low interest rates, present values increase across both investment and M&A transactions.

As with everything in the COVID environment, it is difficult to make predictions with certainty.  Because the stimulus has caused US debt as a percentage of GDP to explode, there is an extremely strong motivation to keep long-term interest rates low.  For this reason, we believe interest rates will remain low for the foreseeable future.  Time will tell whether this is sustainable, but early indications are positive.

Noteworthy Buyout transactions during the month include:

Noteworthy Investments during the month include:

HGP tracks stock indices for publicly traded health IT companies within four different sectors - Health IT, Payers, Healthcare Services, and Health IT & Payer Services. Notably, primary care provider Oak Street Health filed for an IPO, offering 15.6 million shares at a target price of $21/ share. The chart below summarizes the performance of these sectors compared to the S&P 500 for the month of July:

The following table includes summary statistics on the four sectors tracked by HGP for July 2020: