HGP’s July Health IT Insights provides a summary of Health IT transactions, news, and public company performance during the month of July.  Health IT saw four IPOs during a five week period from late June to late July, including Livongo, Health Catalyst, Phreesia, and Change Healthcare.  All were welcome by the market with strong first day performance, with Health Catalyst, Phreesia, and Livongo respectively gaining 50%, 39%, and 36% on the first day of trading.  To put this wave of IPOs in perspective, the last health IT companies to list on a US exchange were iRhythym Technologies and Tabula Rasa Healthcare in late 2016 - representing an almost three year IPO drought.  The month of July was otherwise pretty quiet, except for a regulatory move by the Trump administration to abandon a ban on drug rebates, which resulted in managed care and PBM stocks surging.

The digital health IPO drought finally ended in June and July, with four prominent and successful new issues during the period:

Noteworthy investments during the month include:

HGP tracks stock indices for publicly traded health IT companies within four different sectors - Health IT, Payers, Healthcare Services, and Health IT & Payer Services. The spike in the Payer Index on July 11 was a result of the Trump Administration abandoning its intent to modify drug rebate programs that would lower prices on drugs, which resulted in similar gains for PBM stocks. The chart below summarizes the performance of these sectors compared to the S&P 500 for the month of July: 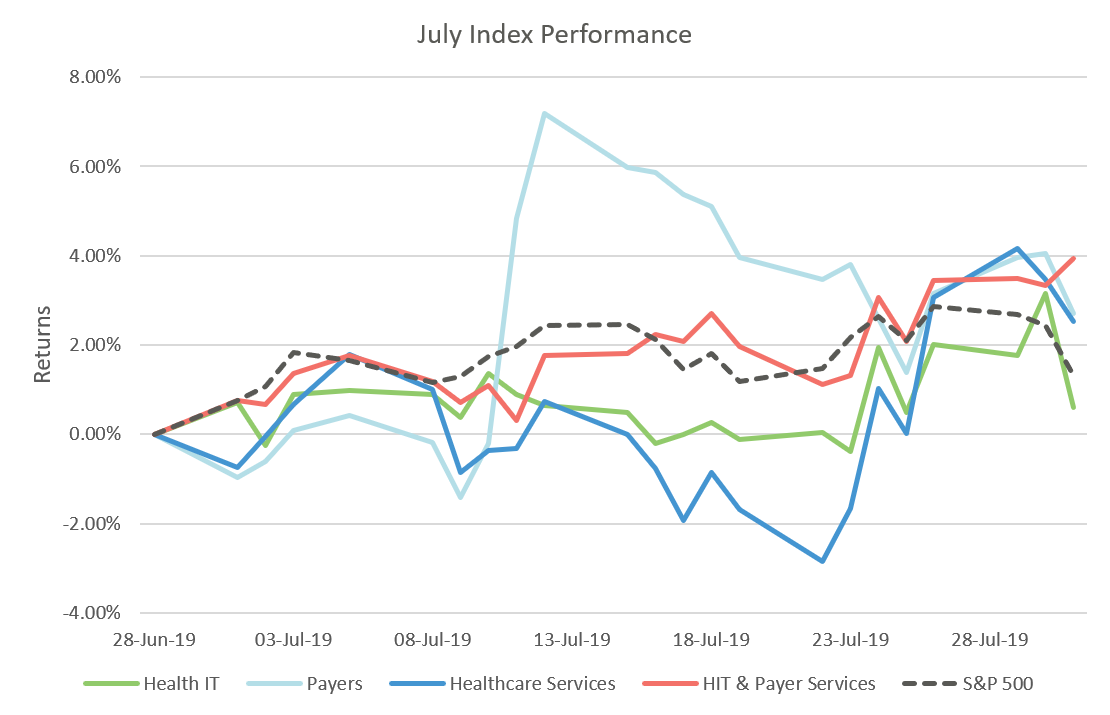 The following tables include summary statistics on the four sectors tracked by HGP as well as the S&P 500 and NASDAQ for July 2019: