athenahealth & Elliott Management - Why Health IT Companies are Going Private

A couple of weeks ago, HGP published a research note highlighting the nadir of health IT IPO activity.  Despite record setting private equity investment, the number of publicly-listed Health IT companies is contracting as the rate of IPOs is outpaced by go-privates and acquisitions.  During the period since 2016, Health IT pulled the plug on the IPO and no single US Health IT company listed on an exchange.

The recently announced athenahealth-Elliott Management transaction may partially explain why the Health IT public roster is contracting, and it’s a thesis that runs counter to traditional financial theory.

On May 7th, Elliott published an open letter to athenahealth’s board of directors, proposing to acquire the company for $160 per share in cash, a 27% premium to the previous closing share price.  Since Elliott publicized its athenahealth holding in May 2017, the stock is down 3% (prior to the recent $160 deal).

Elliott initially disclosed a 9% ownership position in athenahealth in May 2017.  As an activist, Elliott often takes positions in companies with the intent to implement board, management, operational, strategic, and, when appropriate, transaction initiatives.  Executing against this playbook, Elliott initiated a strategic plan with athenahealth in August 2017, which involved undergoing headcount reductions to improve profitability, re-evaluating the company’s inpatient and other acquisition-related and operational strategies, and ultimately separating the Chairman title from athenahealth’s outspoken CEO, Jonathan Bush, with former GE CEO, Jeff Immelt in February 2018. 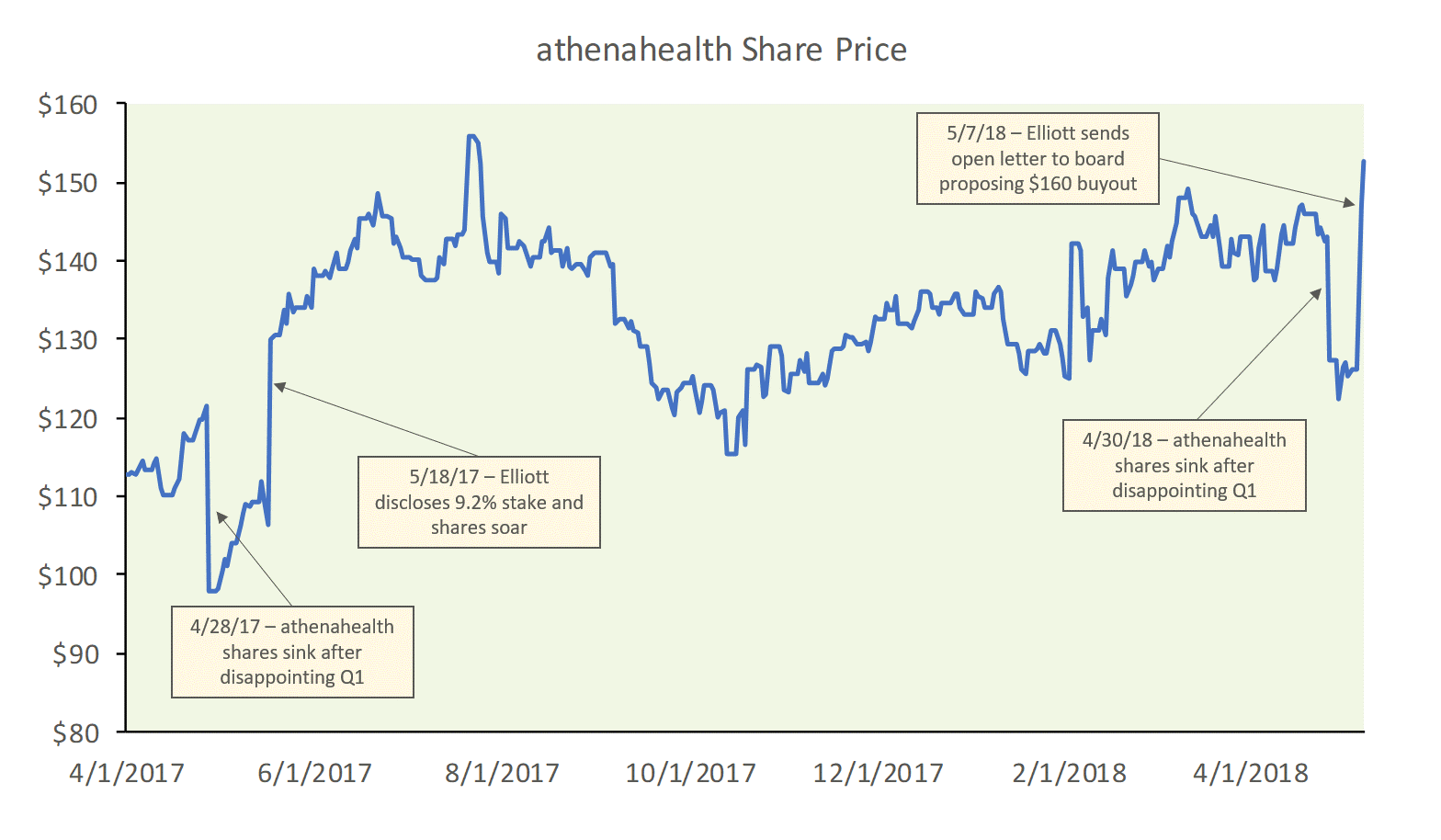 In the letter to the board, Elliott explicitly calls out that they believe the benefit of control is greater than the liquidity benefit of public equity: “Unfortunately, we are faced now with the stark reality that athenahealth as a public-company investment, despite all of its promise, has not worked for many years, is not working today and will not work in the future. Given athenahealth’s potential, this reality is deeply frustrating, but the fact remains that athenahealth as a public company has not made the changes necessary to enable it to grow as it should and to create the kind of value its shareholders deserve.”

Taken against the broader (public and mostly private) universe of Health IT companies, the athenahealth valuation looks less like a premium transaction.  In effect, the Elliott offer seems to be more consistent with the type of valuations HGP sees in the Health IT private markets, noting that the comparative data is somewhat anecdotal and limited given the high number of comparative metrics - size, growth, market, profitability, technology vs services - meaning every company is somewhat unique.

While the concept of go-private, buyout transactions is not new – companies have been taken private for years by private equity investors – the market dynamics have undoubtedly changed in recent years.  The abundance of large cap private equity is seemingly reducing the discount between late stage private and public equity.  As that discount shrinks, the premium for control may also be on the rise.  Given a low cost of capital and strategic sophistication, private equity investors can afford to pay more for control, thereby increasing the control premium.

In a case such as Elliott and athenahealth, it would appear that the premium for control has more value than the discount for illiquidity.  This valuation disconnect may partially explain why health IT companies are remaining private rather than going public.

The interplay between the Health IT public and private markets is dynamic and fascinating.  Institutional public investors are not in lockstep with mega-buyout funds because the two classes of investors take different approaches to valuation.  Given this evolving dynamic, in many scenarios the private equity value chain is proving to be a more attractive alternative than the IPO, thus companies that may otherwise go public are remaining private.  In time, we think the two alternatives will converge as more companies go public due to the backlog of high quality, health IT IPO candidates, which we expect may result in additional valuation support in the Health IT public markets.