Healthcare Growth Partners is proudly based in Houston, Texas, home to the world’s largest medical complex, the Texas Medical Center.  The TMC, which itself is the 8th largest business district in the US, encompasses over 9,200 patient beds and serves over 10 million patient-encounters each year.  The TMC is home to the world’s finest clinicians, academics, researchers, and students.  In addition to its sheer size, the TMC is indisputably one of the finest healthcare complexes ever built.

Houston is also the Energy Capital of the World.  More than 500 oil and gas exploration and production companies, 150 pipeline transportation establishments, and 9 refineries producing 2.3 million barrels of crude oil each day are based in Houston.  Taken together, Houston is home to 3,700 energy-related businesses.

Houston’s reputation for carbon-based energy dominates its accomplishments in healthcare.  Despite the size and success of the TMC, it’s a fair conclusion, because Houston’s energy sway dwarfs that of healthcare on a national and global basis.  Approximately 50% of Houston’s workforce is based on the energy economy, a share that has hardly waivered since 1990 (source: Houston Chronicle, 2017).  The Houston MSA is equivalent to the 22nd largest economy in the world, making Houston’s contribution to the global energy economy outsized.  There is a legitimate reason Houston’s energy reputation precedes itself.  The city has built its reputation and success on fossil fuels.

Is it any wonder that Houston struggles to attract innovative private sector jobs outside of energy? 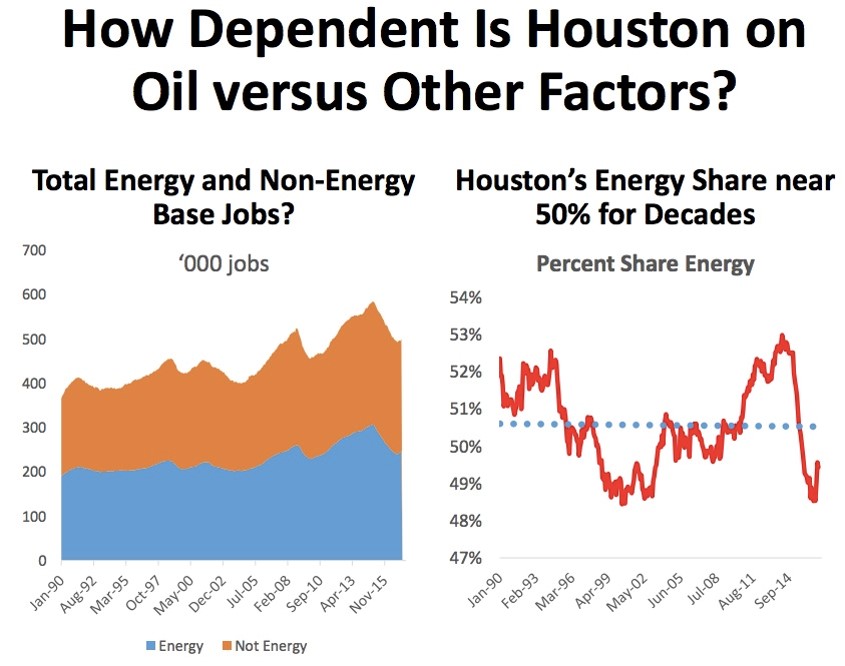 Unfortunately for those outside of the energy economy, fossils do not create an image of innovation.  It is not only frustrating, but it presents a real challenge for the city and its cyclical industrial economy.  Houston’s lack of diversification is not from a lack of initiative. Recently, another startup initiative was recently introduced by the Greater Houston Partnership, which admittedly has a very tough job.

The TMC is arguably the healthcare intellectual capital of the word – clinicians, academics, researchers, and students all serve and innovate around a massive patient population.  What’s missing?

The TMC’s membership is entirely comprised of not-for-profit institutions.  Like any other city, Houston maintains a nice presence of for-profit healthcare – HCA, Tenet, and Kindred all manage a number of facilities throughout Houston – but the for-profit footprint is not a differentiator for a city of this size.  In fact, none of the major for-profit operators is based in Houston.  The mix between for-profit and non-profit systems is a huge difference between Houston and Nashville, another healthcare services hub.

HGP presented at an event at the TMC last week, and we asked our audience of about 30 health tech entrepreneurs to name the largest for-profit healthcare companies based in Houston.  The response?  Silence.

Jobs beget jobs.  Innovation begets innovation.  And profits beget profits.  What Houston lacks are the employers that feed the talent pool to create, innovate, capitalize, and execute.  This is true for all healthcare sectors – services, biopharma, med device, and health IT.  Early stage companies would not leave Houston if they had access to local talent to execute on the business model.

Houston is the fourth largest city in the country with the largest medical center in the world, and a group of 30 medical entrepreneurs can’t name a single for-profit, sizable healthcare company based in this city?  What an opportunity.

HGP is emboldened by the opportunity to build a bigger, stronger, and smarter healthcare ecosystem in Houston.  Houston has incredible intellectual capital, and we encourage civic leaders to focus as much on what we already have as what’s missing.

To a lesser degree, the city needs more structured capital, or to at least redirect the capital that it already has.  HGP is aware of many existing investors based in Houston who invest elsewhere because of a dearth of local, quality investment opportunities.  Lack of capital is a symptom, not the cause.

In order to build a stronger healthcare economic climate and attract private sector (for-profit) healthcare jobs, the energy industry and healthcare industry need to coordinate – resources must be shared and new initiatives and collaborations must be strong enough to supplant old reputations.  Fostering innovation for start-ups is one important way to create jobs.  We think an equally important measure will be the establishment of satellite offices or business relocations to Houston.  The measure of success will be defined by the number of innovative, non-energy private sector jobs created.  To achieve this, Houston must shed its reputation as a fossil-only town, and civic and healthcare leaders must be willing to accept and address the shortcomings of its not-for-profit healthcare ecosystem.